Classic of Russian Cinematography: Man with a movie camera 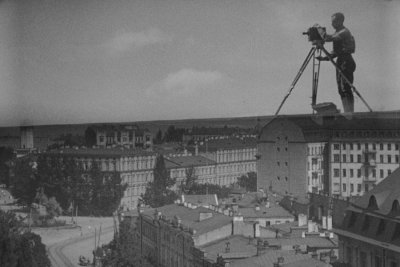 Classic of Russian Cinematography: Man with a movie camera

Vertov's feature film, presents urban life in the Soviet cities of Kiev, Kharkov, Moscow and Odessa. It has no actors. From dawn to dusk Soviet citizens are shown at work and at play, interacting with the machinery of modern life.

Dziga Vertov’s experimental documentary essay remains fascinating after all these years, as potent as an exposed fragment of sodium as an “experiment in cinematic communication of visible events”. This film is visibly excited about the new medium’s possibility, dense with ideas, packed with energy: there are trick-shots, split-screens, stop-motion animation, slo-mo and speeded up action. The title self-reflexively describes what is happening: we see the cameraman recording the images we are seeing; a man is shown with his camera tripod, rushing about, daringly hanging from trams to get his shot. But it is also the film’s subject: man and cinema. Vertov shows machinery and factories and intuits that this is what cinema is: the mass production and consumption of image.